The timing was just right. While Barb and I wait for the final drawings, and consult with our attorney on the building contract, I enjoyed  the previously advertised baseball buddy trip. Having the attorney along as one of my traveling companions was just an added benefit.

We had a great time, catching a near perfect gem of a baseball game, visiting the Henry Ford Museum and Greenfield Village complex outside Detroit, and eating at two  Michigan restaurant renowned in the Raff household, Zingerman’s Deli in Ann Arbor and Redamak’s Tavern in New Buffalo. I haven’t had a chance to write any Yelp! reviews, but if you head for Zingerman’s, just close your eyes and hand over your wallet to the cashier!

But as always on these trips, it was the conversation and the camaraderie that made the miles and days zoom by.  As we told our stories for the second or third time, I recognized all the old nicknames. Now I have never had a nickname. I don’t think Barb ever has either, though nicknaming seems less common in women. So I got to thinking, what kind of person gets a  nickname and who spends their lives as “Les”, or in worst case scenarios, “Lester.” My observations:

If you were the wide receiver in all the grammar school pick-up football games, you get a nickname. If you were the holder for place kicks, you don’t.

If you were a wild and crazy guy in your college fraternity, you get cool wooden paddles with your secret nickname. If you lived at home for college and worked at the Jewel, you get a plastic laminated name tag with you first initial, last name and a red X because you aren’t old enough to sell liquor.

If you are on a bowling team, your bowling shirt has your nickname. If you play mixed doubles tennis, your tennis shirt doesn’t even have your real name, unless your name is Wilson, or even more troubling, Prince.

If you are a  pawnbroker or duck hunter on a TV reality show, you get an authentic redneck nickname. If you are on Jeopardy!, Alex Trebek uses your real name, as in “Wrong again, Les”.

If you are a hot shot  surgeon, you get a nickname from the nurses. If you are a pathologist, no one can remember your name.

So my challenge between now and the time the house gets built is to do something worthy of earning a nickname. I will keep trying, but in the meantime, you can call me Al! 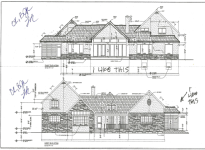